Corfu has been inhabited from prehistoric times, due to its fertile land and natural wealth.

In the course of time, people from innumerable places have inhabited the island, either as visitors, conquerors or immigrants and many of  those different people loved the island and converted themselves to Corfiots. Villages called Lakones (Sparta is the capital of Lakonia), Skripero (the Arab word for fortress is skrep), Kastelani (castello is Italian for fortress), Kyprianades (Kypros is Cyprus in Greek) but also typical Corfiot family names like Sarakinos (Saracen), Athineos (Athenian), Kritikos (Cretan), Bogdos and Bogdanos (names of Serb origin) and many, many others are only some of the traces that betray some of the homelands people left behind to come to Corfu.

This constant influx of “foreigners” has accelerated the last 40-50 years with the rise of tourism. Hundreds of thousands of people of different backgrounds visit Corfu every year, and invariably some of them are so enchanted by the island that they decide to stay.

As a result, Corfiots are generally easy-going and open to different ideas and attitudes. 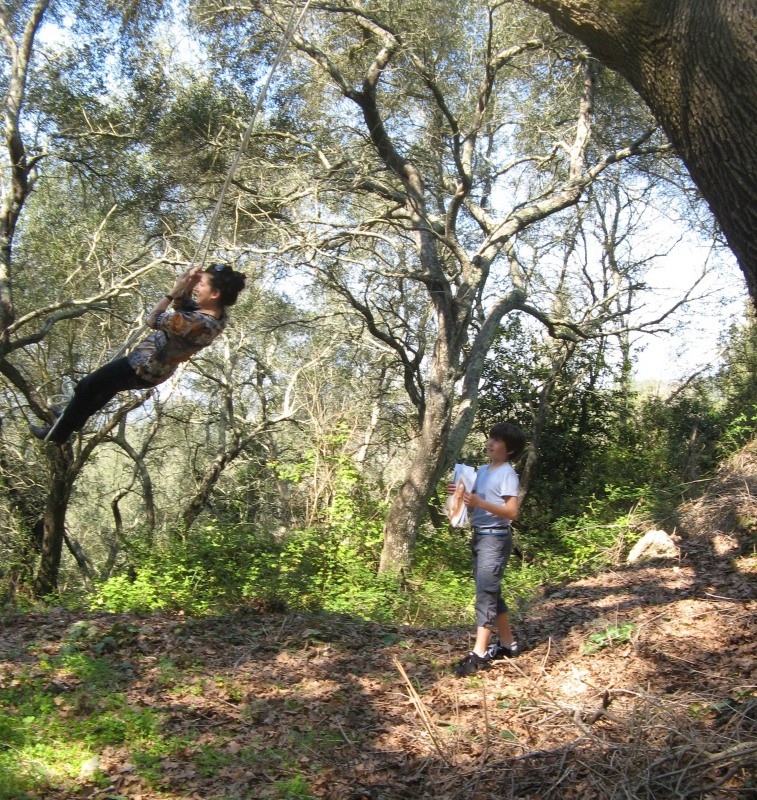 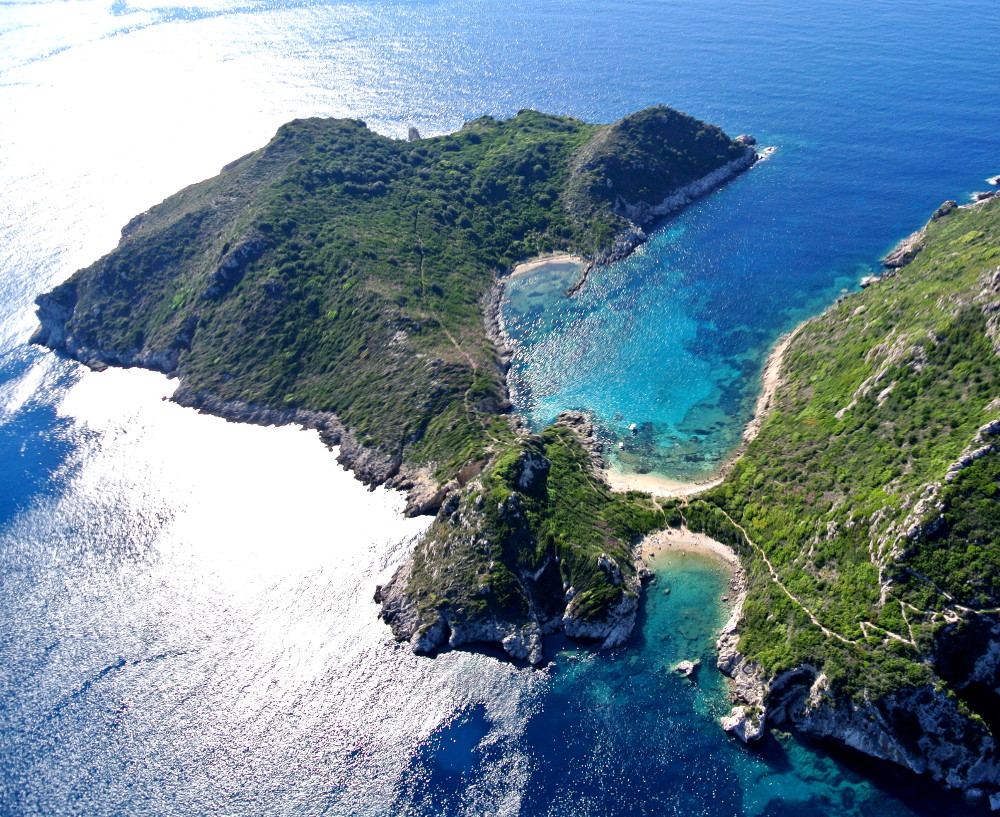 The first evidence of humans on Corfu are stone tools and artifacts that were found in a cave at the Gardiki Grava near Agios Mattheos and date back to Paleolithic times (30,000 to 10,000 BC).

At that time the level of the seas was much lower and Corfu was not an island, but was connected to the Greek mainland. Separation from the mainland occurred during the Neolithic period (10,000-8,000BC) when, with the melting of the ice, the level of the sea rose. Remains of this period were found in a settlement near Sidari. Settlements from the Bronze Age (2,000 BC) have been found near Afionas and Ermones.

Corfu is mentioned in Homer’s Odyssey as Scheria, the island of the Faiakes (Phaeacians), were Odysseus is washed ashore, taken care of by Nausicaa, the daughter of King Alkinoos and wise queen Ariti, and taken to Ithaca on one of their ships. It is interesting to note here that Phaiakian ships were unlike all other ships and had high tech (or magical!) features.

“ For the Phaiakians have no pilots; their vessels have no rudders as those of other nations have, but the ships themselves understand what it is that we are thinking about and want; they know all the cities and countries in the whole world, and can traverse the sea just as well even when it is covered with mist and cloud, so that there is no danger of being wrecked or coming to any harm.”

Legend has it that Odysseus was told not to look back to Scheria as he was sailing away, or his ship would be petrified. Of course, he couldn’t resist the temptation and as a result there are several rocks around the island that claim to be Odysseus’ petrified ship!

In the 8th century BC, Corfu was colonized by the Corinthians who founded the city of Corcyra or Kerkyra (as is the modern Greek name for Corfu) in the peninsula of Kanoni. The whole peninsula is scattered with ruins that show that Corcyra developed to become a considerable naval force. It was the conflict of Corcyrans and Corinthians in 435 BC that led to the famous Thirty-year war between Athens and Sparta when the Athenians allied with the Corcyrans and the Spartans came to help the Corinthians.

In 229 BC, Kerkyra was conquered by the Romans and for a long time passed out of notice. The Romans neglected the town of Corfu and prefferred to build their villas in Kassiopi, at the northeastern tip of the island, from where they could control the Corfu straits. 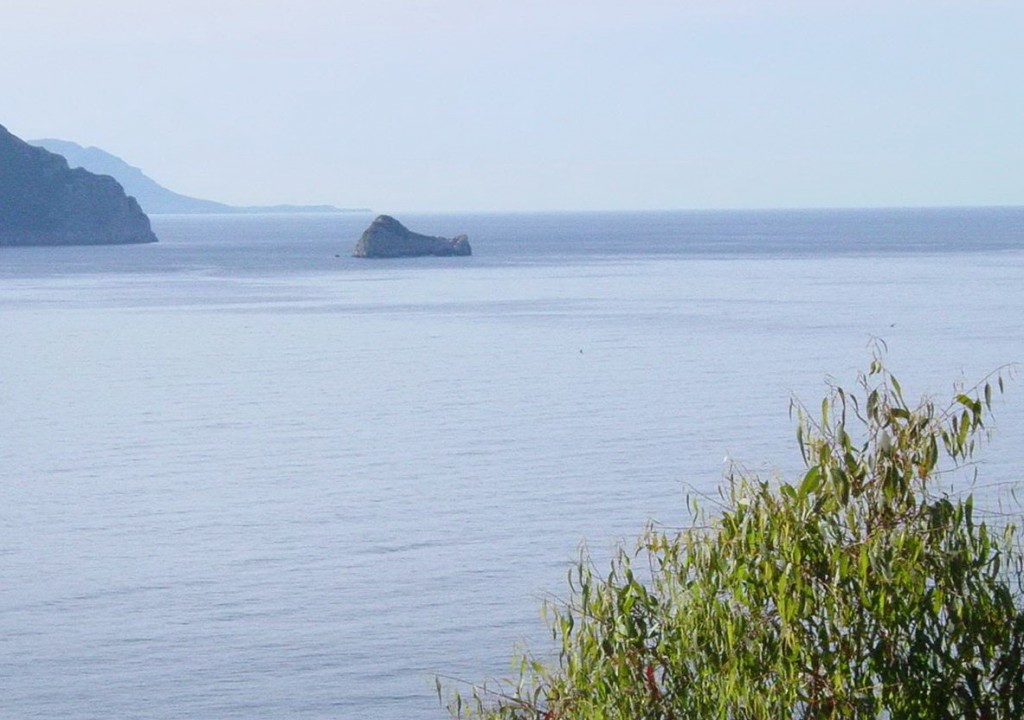 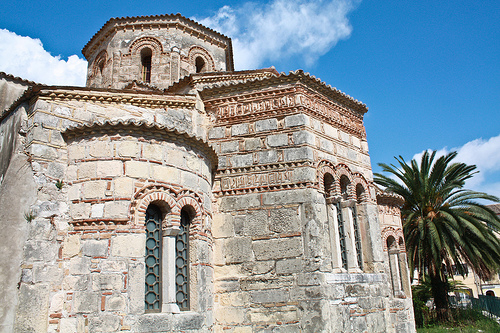 From the 4th until the 11th century AD, Corfu came under Byzantine rule. Some churches from that period still survive, the oldest remaining church on Corfu is the church of Iason and Sosipatros in the suburb of Anemomilos.

Between the 11th and 14th century, Corfu was conquered and ruled by several European knights heading for Jerusalem in the course of the crusades (Genoese, Anjou, the despots of Epirus and others).

1386 AD marks the beginning of the Venetian rule which lasted until 1797 AD. This was probably the most important period for the island, not only because of the economic progress and the building that went on but also because it was during this period that the rest of Greece fell under the domination of the Ottoman Turks. During the period of Venetian rule the island became a haven and place of refuge for many scholars and artists escaping the Turkish occupied mainland and thus helped make the island one of the most culturally developed regions in the east. The island became a fortress and the base of the admiral of the Venetian fleet. In this period Corfu flourished and acquired a large part of its current town layout, fortifications, customs and culture.

Probably the greatest contribution the Venetians made to Corfu was the cultivation of the olive tree.

Around the middle of the 16th century, the Venetians offered a “subsidy” to anyone replacing their vineyards with olive trees. This was a great incentive for Corfiots and resulted in the island being covered in olive trees. Nowadays, estimates on the number of olive trees on Corfu range anywhere from 3 to 6 million!

When Napoleon overthrew the Venetians and the French occupied the island in 1797 the Corfiots welcomed them with enthusiasm believing that because of the French revolution the lower classes would be treated better. But this was not the case. The French imposed heavy taxes on the people though they did introduce a system of primary education and a printing house. 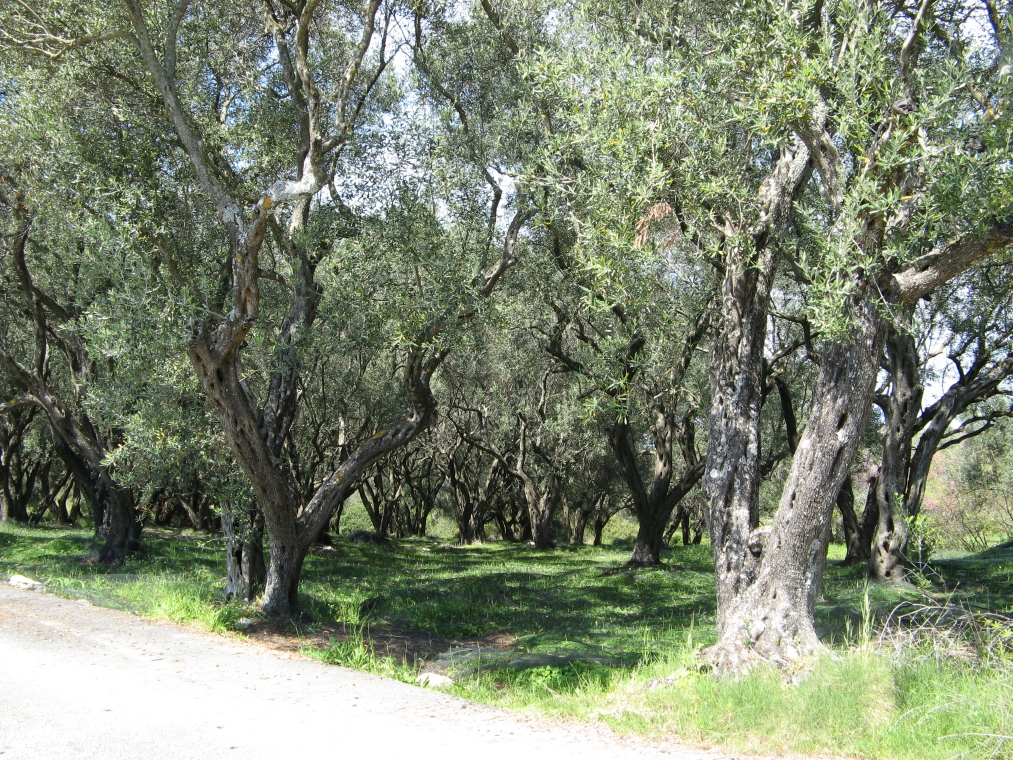 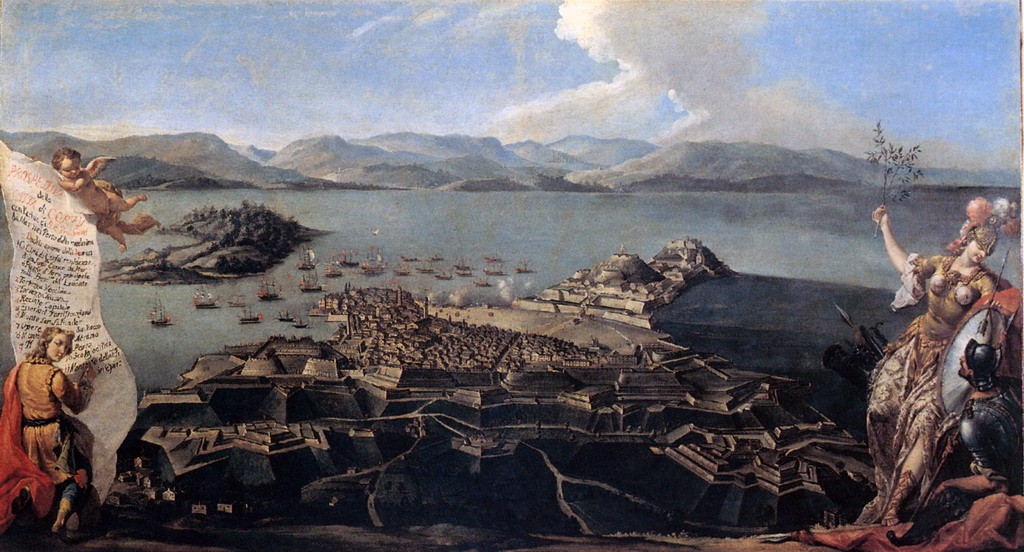 But two years later a combined Russian and Turkish fleet captured the island after four months of fighting and Corfu became the capital of the Septinsular Republic which included all the Ionian islands. Then in 1807, when Russia and France signed the treaty of Tilsit, Corfu and the other islands became provinces of Napoleon. This time around the French took more of an interest in the intellectual and economic development of the island, constructing new buildings including the famous arcades of the Liston and introducing new crops like potatoes and tomatoes.

When Napoleon fell in 1814 Corfu was placed under the protection of the British. In 1824 the first Greek university, the Ionian Academy, was set up. Despite the tension between the British and the Corfiots, the years of British rule was responsible for the building of the roads and the creation of the island’s water supply. Part of the British heritage is also cricket, which is still played on the Esplanade, and ginger beer (tsitsibira in Corfiot)!

The Ionian islands did not become a part of Greece until 1864 even though the Corfiot Ioannis Capodistrias was elected the first President of Greece in 1827 and assassinated in 1831. Corfu was declared neutral territory but was invaded by the French in World War I. Serbian forces found sanctuary in Corfu, a reason why Serbs and Greeks calls each other a “Orthodox Brothers”. Corfu was bombed by the Italians in 1923 and again during World War II and was bombed and occupied by the Germans until the war’s end.

The sixties marked the rise of tourism in Corfu. It became one of the most cosmopolitan resorts of the Mediterranean and touristic development continued uncontrolled until the present day. The result was that money flowed to the island’s inhabitants but, on the downside, many of the once picturesque villages and beaches bear the marks of unplanned and ugly building and nonexistent planning. You can watch three Corfu videos from 1962 that illustrate just how beautiful this island used to be.

Fortunately, the last decade there seems to be a new trend on Corfu.

Many Corfiots return from abroad bearing fresh ideas, many people from Europe and all over the world have bought land and houses on Corfu and some of the Corfiots seem to understand that the “old way” of doing things is leading to a dead-end. There are more and more people who try to make a living out of eco-tourism, biological agriculture, art, meditation, alternative therapies and many other nice activities.

There seems to be a new current in Corfu, away from overconsumption and towards another, fairer and healthier lifestyle. And this is exactly what Green Corfu hopes to support!