Heat waves, an extreme form of weather, happen quite often in Corfu, and they can be quite dangerous for a lot of people. It is prudent to take safety precautions and protect one’s health from these weather events when they occur – the latest one finished a few days ago.

One of the worst heat waves to affect Greece was the 2007 european heat wave with temperatures reaching 46.2°C. It took the lives of 18 people and more than 100 fires broke out around the country. This was the worst heatwave in recorded history to ever hit Greece.

More than 200 people were hospitalized for heat-related treatment, such as heat exhaustion, heat stroke, and related illnesses. The human body goes through a lot in the midst of a heat wave.

Are heat waves more common now than in the past?

In the last few decades heat waves have become more frequent and more deadly and will probably continue to become even more common in the future as a result of climate change. Deaths from heat waves may triple by 2050. Furthermore by 2100 the majority of humankind will be in danger of facing deadly heat waves.

Cities are getting warmer and warmer every year. Much warmer than other rural areas due to the urban heat island effect. Cities can get about 7.8°C hotter than other rural areas. The combination of rising temperatures from climate change and rapid population growth pose a great threat to cities. More than half the world’s population live in cities, if these places get hotter and hotter, extreme weather will become much more common and can pose a serious threat to public health in these areas.

According to this map – summers in Athens will get about 7 degrees warmer by 2100, resembling the current temperature of the city of Faisalabad in Pakistan. Fortunately however Corfu is and will most likely always be much cooler than Athens. The temperature in Corfu is usually 2-3 degrees cooler than it is in Athens.

How to protect yourself during a Corfu heat wave?

We hope these tips will help you get through a Corfu heat wave! 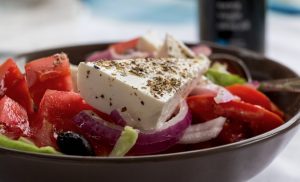